It is a very good read for anyone who's trying to understand the modern history and possibly the future of the US/Muslim world relations from an honest western/American/non-Muslim perspective.
The author challenged several classical western principals that are commonly used while dealing with the Middle East whether in the academic arena of Middle Eastern studies or in policy making.

He's refuting concepts such as "Clash of civilization", "What went wrong" and "Why do they hate us" and I was really glad to see this coming from someone in the west.

I found some useful arguments that reminded me of my personal struggle to explain myself and where I'm coming from as a Middle Easterner to the rest of the world. I will share some quotes from the book's Amazon page and then discuss my own reflections from the chapter I especially liked: "Looking for Love in all the wrong places in the Middle East".

"The idea that people in the Middle East once embraced the goal of becoming like Europe and hoped that by adopting European ideas and institutions they would someday experience all of the liberal values we recognize in the Europe of today is nonsense. It assumes a historical outcome for Europe itself that no one even in Europe could have predicted."

"Those who advanced the Japanese occupation as a model for postwar Iraq seem to have baseball, Hello Kitty, and Elvis impersonators in the back of their minds rather than headscarves and turbaned mullahs.
Like latter day missionaries, we want the Muslims to love us, not just for what we can offer in the way of a technological society but for who we are -for our values. But we refuse to countenance the thought of loving them for their values."

"The founders of Middle East studies ignored recommendations that they focus on contemporary Islam and focused instead on Middle Easterners trying to act like westerners. There weren't a lot of these, just as there hadn't been a lot of converts, but the conviction was strong that those few would be pioneers in bringing western modernity to the region. The people we supported as agents of modernity became tyrants."

While observing the Middle Eastern peoples and cultures, "Looking for love in all the wrong places" is another orientalist pattern that appears in the attitudes of the American observers to this complicated region.

What does it mean?

It means that instead of trying to learn about the region and love/hate it the way it is, these observers look for Middle Easterners they can love, and a Middle East they can relate to while overlooking everything else, intentionally and sometimes unintentionally.

The author argued that the Middle East they're willing to love is ready for an American version of modernization, and ready to absorb American values with little resistance.

The Middle Easterners they're willing to love are English speaking professionals who've received a reasonable amount of western education. The exotic folkloric traditional folks are also lovable but they're not intellectually competent enough to work with them.
This pattern was describing the majority of contemporary American policy makers, diplomats, and researchers on the Middle East.
I found that this phenomena appears also in the attitudes of people who're interested in the Middle East or watching it outside of academia and policy circles.
**************************** 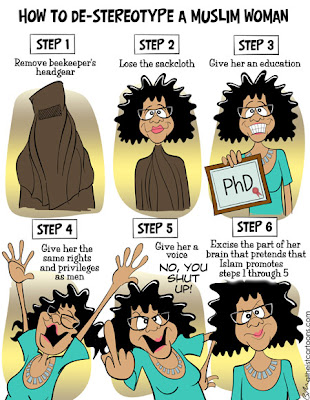 "I'm a liberal educated non-religious woman from the Middle East ready to absorb western/American values.
I'm not bearded or dressed up all in black, does that make me more lovable than fellow Middle Easterners who fit into your preconceived ideas and stereotypes?" 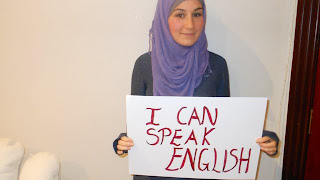 "I'm not too assimilated with the western culture but I'm educated according to your perception, I do speak English and I can totally fit in. I'm also not dressed up all in black or have a beard but is my headscarf an issue? Does it make me more palatable than a Niqabi? Or less acceptable than a seemingly liberal Middle Easterner?

***********************
I encounter this all the time while dealing with people who're interested in "us". And for those of us who're standing on the fence between the two worlds because they happened to have some "access" it is a very problematic issue.

Which one do you have in mind when you're talking to me?

Am I supposed to censor myself about myself in order to be sensitive with your ignorance or the fact you're not doing your part in learning about us just like we're learning about you?

It's always a hard job to figure out which version people have in their mind while talking to me. It is so difficult because we are the case study, the educators and the refuters of the misconceptions all at the same time.

In order to make it easy on both of us you need realize that you are not going to learn if you are just looking for "Middle East and Middle Easterners I can love".

Instead, I suggest you put your personal feelings and judgments aside and then begin to learn/relearn/unlearn about other people/societies/cultures the way they are.

Of course you will find that there are many not so nice things -from your perspective- about this part of the world and about these people. However, it is not necessarily the same stuff you see on media or hear in that Near East /Middle East / Islamic studies class you attend. 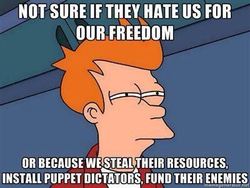 As Bulliet clearly discussed it you must consider the fact the same exact thing applies to your nationality, cultural background, and heritage when people from elsewhere look at it.
Date 3/29/2013 07:26:00 AM No comments: Links