Srebrenica: A story of a Muslim Genocide 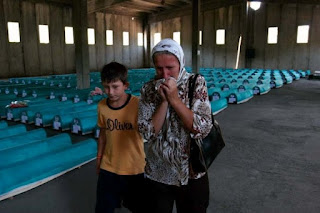 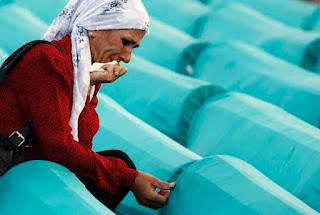 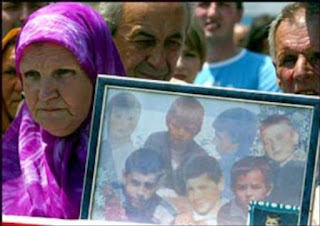 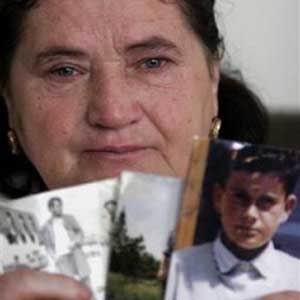 I was five when the Srebrenica genocide happened but I remember. Yes, don't laugh please. Kids here in this part of the world remember things like this.
My 14 years old cousin Omar remembers his 2 years old memories of the Iraq war.
I was too young so, I have such vague memories of it, I was a first grade kid in primary school and somehow I still remember a few things.

I still recall the Arabic songs/Nasheed my aunts used to play from an album called "The wounds of Sarajevo".
A collection of Arabic poems in the form of songs talking about the massacres, about places called , and all these hard to pronounce Slavic names.

Later I found these poems and songs online after years of research and I still love to listen to them often.

I remember she had a bumper-sticker about on her radio/cassette device where we used to play these songs.

I remember a lot of the Modern Standard Arabic vocabulary I picked up and the concepts I learned about through this . I remember asking her as we were watching black and white TV reports and I was having such a hard time understanding why they are killing kids somewhere in the world called Bosnia.

It's so strange how I could clearly remember these details but it also shows what kind of childhood some of us have experienced in even though we were too far away from these conflicts since the post Camp David era.
Still none of my peers in school and all the way up to college would relate to these stories or know of them.

"European Muslims", "Non-Arabic speaking people who believe in the same God and book I believe in", Yugoslavia", "Serb and Bosnian" and of course the "Hate/ discrimination crimes" all were things you don't get exposed to if you're a regular Egyptian who grew up in culturally Muslim households in a secular educational system.

As I grew up and while I was exploring my identity I felt a strong connection with these people though, more than just sympathy. I was so curious and wanted to know more about this part of the world and why these white Europeans who don't look like us are Muslim and why they were massacred like that.

When I was introduced to the internet finally in 2003 I did an intensive research on the issue in Arabic ( There wasn't much out there at all back then) and eventually had to do more in English. This was one of the topics that made me want to start blogging when I was 17 or so.
I didn't think anybody else around me knew or cared and that was hard to understand.

Later in 2008 I wrote 2 articles on the Bosnian Genocide and until today I still get visits from people searching it in Arabic.

Until today I still listen to all the beautiful poetry they wrote about the war/genocide that I memorized growing up in Arabic.


I can't miss July the 11th without thinking about it and recalling all the Aljazeera documentaries and all the articles and pictures I have in the back of my mind about this horrific event.

I still feel the words on alienation, estrangement, and that Bosnian guy singing about growing up in a non-Muslim country missing the warmth of home, the mosques, the call to prayer, the family and friends, and everything he left behind after becoming a refugee knowing that he can't be back. Ever.

Before the uprising was pushing me further away more and more and at that time I started to be an advocate of such unpopular/ unknown causes that nobody here cares to learn about.

I started an online educational/awareness campaign on the online forums I used to participate in about this part of the world, the Balkan and central , its history and present, the early Islamophobia in the 1990s.

Nobody I know really cared at that time, but I was happy I got some people excited about the idea online.

I couldn't understand why nobody else was wondering as I did for so long. 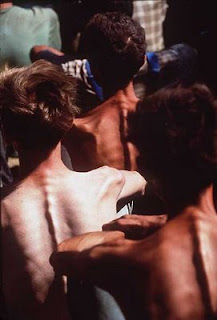 How come 8,000 people were killed in 4 days for being males and Muslims and how come women and girls got raped for being Muslims and females?

How come people were kept in concentration camps starving to death and getting tortured like this?

Why didn't anybody talk about it as much as they talked about other events while it was the most outrageous mass killing in after WW2? 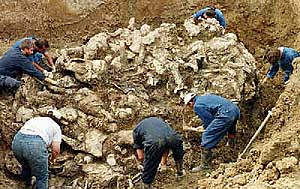 Why do you need to be a Muslim to speak about it and why don't fellow Muslims know about it at first place?

90% of all the mosques, schools and old architecture were destroyed , more than 700 hundred mosques and more than 850 public library.

Only (yesterday) around 500 newly discovered bodies where buried.

"How can these army generals do it and get away with it?" that was one naive question I had as a first year college student until I saw other army generals doing similar things in my own country.

Looking at the destroyed buildings and the coffins piling up in reminded me so much of these pictures showing green coffins and veiled women crying over them. For some reason it wasn't like scenes at all, it was more like .

Does it make a difference to educate ourselves about history mistakes and educate those around us in order to avoid it?

**************
The Bosnian genocide and the way the world responded to it all taught me so many lessons about our world and the reality of things. The racial and religious dynamics in the whole thing have hundreds of lessons on how our world is operating.

I don't know what could be done to stop the bloodshed around the corner from my house in Egypt to be thinking about solving these issues in other countries.

I just know that this specific event has certainly shaped the political and religious consciousness of so many young Muslims in the world as it did with me. More people should learn about this massacre in this context.

The least I can do about it is talking and honoring these victims by letting more people learn about what happened to them.

For those of you who still don't know much about it, you can easily google: Srebrenica + Genocide + 1995 and you will find plenty of documentaries and articles.

These are some of the tweets people posted today on twitter to commemorate Srebrenica Massacre, you still can follow the hashtag #Srebrenica to get updates on it:

Zbigniew G ‏@Zbigniew_G
In many cases, body parts of one individual have been found in several different mass graves ‪#Srebrenica

MPACUK ‏@MPACUK
‪#Srebrenica, where nearly 9000 Muslims were murdered. They are still finding more bodies 17 years on! We will never forget!

MPACUK ‏@MPACUK
Rape was as much a weapon as bullets & bombs. Women raped in front of their parents, children. Fathers forced to rape daughters‪ #Srebrenica