We will never forget

A massacre!
Yeah, this is actually something worthwhile writing about after a quite long break.
Yet another massacre, it wasn't the first and surely won't be the last as long as the international community remains silent like always used to be.

Next Tuesday, 8th of April 2010 will be the 40th anniversary of the Israeli attack on a small village primary school in Egypt.
I've tried searching for more details about the massacre online in English but seems like there is nothing more than what was mentioned in Wikipedia as follows:
Bahr el-Baqar incident
From Wikipedia, the free encyclopedia
Bahr el-Baqar incident happened during the War of Attrition, where the Israeli air force carried out a raid on the Egyptian village of Bahr el-Baqar, south of Port Said, in the eastern province of Sharqiyya, the raid resulted in the destruction of a primary school full of school children.
The Attack
The attack was carried out by Israeli air force F4 Phantom II fighter bombers, at 9:20 am on Wednesday 8 April, 1970. Five bombs and 2 air-to-ground missiles struck the single-floor school, which consisted of 3 classrooms.
The Israelis claimed that they believed the target was a military installation. Casualties Of the 130 school children who attended the school, 46 were killed, and over 50 wounded, many of them maimed for life. The school itself was completely demolished.
Well, I'm amazed by the huge amount of useful information I've found on Wiki!Thank you so much, Wiki.
Apart form the fact they insist on calling it an "incident", the funny thing is that the page is only available in Arabic and in a weak English version without details. Anyhow, I shouldn't have been any surprised.
I mean, why should anyone even care for a bunch of murdered  kids in an Egyptian primary school in a tiny small village?
--------------------
Ok, let's see what was written about the massacre on other sites:
From "Encyclopedia of the Palestine Problem" by a Palestinian author named Issa Nakhla.
Someone won't be easily accused of being biased according to what you might kindly read here in his biography:
http://www.palestine-encyclopedia.com/EPP/TheAuthor.htm
"How superior the Israeli pilots were was amply shown on April 8, 1970 when they hit an elementary school at Bahr al Baqr, fifteen miles west of the Suez Canal, killing forty-six Egyptian school children."
In the Citations: (8) "April 8, 1970: Israeli jets struck Bahr El-Baqr, Egypt, killing 46 children in their school."
http://www.palestine-encyclopedia.com/EPP/Chapter31.htm
2- From Holocaust Facts:
http://therealholocaust.org/en/holocaust-facts
Egypt - Bahr el-Baqar School “April 1970”:

Bahr el-Baqar is an Egyptian village located in south of Port Said. The attack was carried out by Israeli air force F4 Phantom II fighter bombers, at 9.20 am on Wednesday 8th April, 1970.
Five bombs and 2 air-to-ground missiles struck the single-floor school, which consisted of 3 classrooms.
46 students were killed and over 50 were wounded, many of them maimed for life.
--------------
Like I always say, neither being a Muslim nor an Egyptian is the reason why I feel really bad about things like that.

I'm merely a human being and any normal human being with a minimum set of human emotions and values would feel the very same way about it.
Regardless of what those kids belonged to, any sane human being would never find a reasonable reason behind attacking a school full of kids assuming that it was a fake military installation.

Especially when the same reason is mentioned every time, last one was about some school in Gaza in 2008. 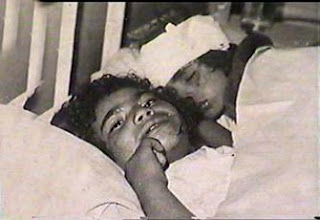 ( One of the very few clear photos I managed to find for the kids)
Those kids in their first school years had dreams, just like how yours do but apparently they were not supposed to dream since they were "others".
Now, honestly just forget about the whole "Palestinians gotta stop fling rocks" thing and tell me: what do you personally think of this?
Date 4/07/2010 01:52:00 AM

I'm a human being and any normal human being with a minimum set of logical human emotions and values would just feel the same about it.

we hate the hate

we will never forget

Each time I come here, I feel ashamed & proud. Proud of u and ur efforts, ashamed of myself and my underused skills and knowledge..
God bless u dear.

we will never forget.
as long as powerful reminders of us - such as u - exist.
WE WILL NEVER FORGET