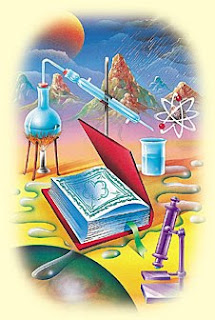 ‎"The medieval Islamic world, from Central Asia to the shores of the Atlantic, was a world where scholars and men of learning flourished.
But because we have tended to see Islam as the enemy of the West, as an alien culture, society and system of belief, we have tended to ignore or erase its great relevance to our own history."

Prince Charles, Islam and the West.

********************
I'm a Biotechnology and Genetic Engineering major and I think I have always loved science growing up although Egypt is not an encouraging environment.
My reasons for wanting to become a scientist one day Inshallah originated from my religious upbringing and the stories I read about my ancestors. This is something many people find contradictory especially the western areligious people who put science on top of everything else and think that religion and science don't come together or encourage each other.
Muslim scientists and scholars have contributed immensely to human knowledge especially in the period between 6th and 16th century CE.

However, their contributions have been largely ignored, forgotten or have gone un-acknowledged.

The islamophobic western world especially outside of the world of academia intentionally neglects the contributions of the Muslim world to modern days science. "Science and no religion" advocates overlook the fact that the founding fathers of Algebra, Geography, Medicine and many other disciplines were devout Muslim scholars who also wrote books on Quran interpretation, prophetic tradition and explained the Islamic Sharia, all together.

One instance is the fact Al Khawarizmi (The father of Algebra and Algorithms) initially wrote his famous book on Algebra to easily calculate the overwhelming amount of inheritance issues Muslims were getting confused over back then. Solving the inheritance problems based on the Quranic guidance was one of the reasons why Algebra was founded might not appeal to many secular folks nowadays but this is a historical fact.

Unfortunately, the current scientific environment of the majority of Muslim countries is shameful or doesn't even exist at all which encourages these negative stereotypes on Muslims.

So I thought it would be good to remind people of this especially now for two reasons:

1- Educate those in the west who're attacking Islam and Muslims left and right and make an argument for those who pretend they don't know that the foundation of modern days sciences were put by devout religious people.

2- Encourage the intellectually colonized young Muslims of nowadays who're admiring the western world and looking for a role model there to learn about the contributions of their fathers and think about reviving this spirit. 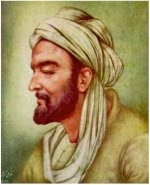 One example for a talented Muslim scientist of Andalusia (Spain and Portugal nowadays) is Mohammad al-Idrisi who was a  geographer, cartographer, botanist, traveler and poet.
He has given the names of the herbs in many languages like Greek, Persian, Hindi, Latin, Berber and Arabic.
In the West he is best known as a geographer, who made a globe using a silver sphere for King Roger of Sicily. 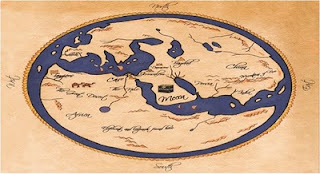 (The map Idrisi drew for the old world as we know it before the discovery of the Americas/Australia)
Al-Idrisi was a great geographer and traveler who produced original work in the field of geography and botany.

Some historians consider him the greatest geographer and cartographer of the Middle Ages. His books were translated into Latin and became the standard books on geography for centuries, both in the east and west.

From the following links you can find his story and many others like him:


This Website MuslimHeritage.com is owned, operated and published by The Foundation for Science, Technology and Civilisation (FSTC), a British organisation based in Manchester, UK.
Some recognition from the Western World and a great job in documenting and bringing all the missing stories about the scientific Muslim heritage.

"If the leading scientific research in the world was being conducted by Muslims, and the most advanced laboratories were in Islamic lands; and the Islamic industrial sector was the most developed and sophisticated establishment in the world, it would never come to the mind of anyone, no matter how ardently they hated religion, that Science and Religion are incompatible, or that religion is backward.

For 1200 years this was never argued, until the centers of science and learning in the world came under Secular political authority - then suddenly, history was changed to fit the new Secular narrative. And all the while, people forgot the plain truth, namely that the vast majority of scientists (and geniuses) throughout the entire history of mankind, believed in God and followed a religion. "

Brother Abdullah Al Andalusi in a speech at St George's, University of London.

You have really great taste on catch article titles, even when you are not interested in this topic you push to read it

Bravo, i can understand that you have gathered all this information painstakingly.. this is a great tragedy for we Muslims that we have forgotten our ancestors, who were torch bearers of world in all fields of learning, science and knowledge.. ... be blessed

This article is true for most technology, science, and discovery... forgetting the genesis of the discovery to grant the developer rather then the inventor of the discovery.
Thank you for sharing your thoughts.