No Tarawih for China Muslims 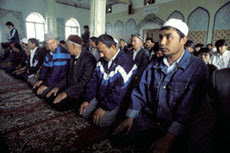 BEIJING — Muslims in China's far northwest region of Xinjiang are banned from performing Tarawih prayers, special nightly prayers performed during the holy fasting month of Ramadan, with men prevented from growing beards and women from covering their faces, in the latest restrictions on China's Muslim minority.

"We must timely warn and stop religious believers from organizing and planning large scale prayer groups and prevent any large crowd incidents that could harm social stability," said a notice on the Xinhe county website cited by Agence France-Presse (AFP) on Friday, September 5.

Orders were issued by local governments this week to stop Uighur Muslims from performing their rituals during the fasting month on claims of preventing violence.

"Any person caught forcing another to observe Ramadan would be punished," said a notice posted on Xinjiang's Zhaosu county website.

In some areas, Muslim men are banned from growing beards and women prevented from covering their faces with veils.

"For those that maintain beards and for the women who wear veils, we should take all effective measures to have them shave their beards and take off their veils," the Shaya government said, without elaborating on how this would be done.

The county government also stepped up patrols around mosques in the region.

"The handing out of religious propaganda in public places by any work unit or individual is banned," the Shaya government said.

"We must strictly prohibit the playing of any audio-visual tapes, loud speaker announcements and religious drum rituals that could disrupt the Ramadan festival."

Muslims worldwide began this week observing the holy fasting month of Ramadan, the ninth month of the Islamic lunar calendar.

During Ramadan, adult Muslims, save the sick and those traveling, abstain during daylight hours from food, drink, smoking and sex between dawn and sunset.

Muslims dedicate their time during the holy month to become closer to Allah through prayer, self-restraint and good deeds.

to continue reading the article:

Email ThisBlogThis!Share to TwitterShare to FacebookShare to Pinterest
Labels English, For Muslims, Media and news